Traminette is a hybrid grape variety with many qualities that recommend its cultivation in Virginia, however, wines made from this variety typically have high levels of protein instability. In this experiment, fermentation on bentonite to reduce protein instability is tested at two levels: 50 g/hL and 150 g/hL. Fermentation rate was not affected by bentonite rate, and finished wine chemistry was very similar between treatments. The wine fermented on 50 g/hL Fermobent required an additional 4 lbs/1000 gallons (48 g/hL) bentonite addition post fermentation to achieve stabilty while the wine that received 150 g/hL Fermobent was protein stable at the completion of fermentation. The wines were not found to be significantly different in a triangle test, however, mean descriptive scores for oxidation were nearly significantly different between the treatments with the higher level of Fermobent scoring slightly but consistently higher.

Traminette is a hybrid grape originating from a cross of Joannes Seyve 23-416 and Gewurztraminer1. This variety has several qualities that recommend its cultivation in Virginia, such as good cold-hardiness and disease resistance with large, loose clusters1. Traminette can be used as an aromatic varietal wine or a blending component to white table blends. Due to its Gewurztraminer heritage, it is often made with skin contact to elicit spice and floral aromas1.

Much like Sauvignon Blanc and Pinot Gris, Traminette also suffers from high levels of protein instability, often needing 7 pounds per 100 gallons (0.84 g/L) bentonite or more to achieve stability. At Altillo, Traminette is made into a varietal wine and therefore it is desirable to maintain as much aromatic intensity as possible. In this study, a single lot of Traminette was split into two treatment groups:

Traminette grapes were chilled after harvest prior to processing. Grapes were crushed and destemmed into Tbins with initial addition of 60 ppm SO2. After 30 minutes, 2g/100 kg Cuvee Blanc was added and must was allowed to soak on skins for 3 hours. After pressing, 100ml/1000 gallons of Cinn Free was added to the tank for cold settling of juice. After racking to two identical tanks, 20 g/hL Opti-white, 25 g/hL Booster Blanc and 5g/hL FT Blanc and 2.3 g/L acid was added, then juice was inoculated with 25 g/hL ICV GRE yeast rehydrated in 30 g/hL Go Ferm. Fermobent was also added at this time: 50 g/hL in one tank and 150 g/hL in the other tank. Fermentations were monitored daily for Brix depletion and temperature with the addition of 20 g/hL Fermaid O at 1/3 Brix depletion and 42.5 g/L sugar at 2/3 Brix depletion. At the completion of fermentation, wine was chilled, then racked off gross lees, and treated with 80 ppm SO2.

After the completion of fermentation, protein stability was tested at ETS labs using a fast heat test at 80°C for 6 hours. Wine was transferred to carboys and treated with the indicated amount of bentonite to achieve protein stability prior to sensory analysis.

Sensory analysis was completed by a panel of ­­­25 wine producers. Wines were presented blind in randomly numbered glasses. Tasters were presented with three wines, two of one type and one of another, and asked to identify which wine was different (a triangle test). There were three tasting groups with the unique wine in the triangle test balanced between groups. Tasters were then asked to score each wine on a scale of 0 to 10 for aromatic intensity, fruit intensity, palate volume and oxidation. They were also given open ended questions to describe the wines. Results for the triangle test were analyzed using a one-tailed Z test. Descriptive scores were analyzed using repeated measures ANOVA.

After pressing and cold settling, Traminette juice had 18.6°Bx of sugar with a pH of 3.68 and 291 mg/L YAN. There was no noticeable difference in the progress of fermentation between treatments (Figure 1), indicating high rate of bentonite did not slow fermentation. Measures of general chemistry were very similar between treatments (Table 1). There was also no measurable absorbance at 420nm, 520nm, or 620 nm, indicating no additional browning (a measure of oxidation) with high bentonite rate. The higher level of bentonite treatment resulted in a protein stable wine at the completion of fermentation with notably less chitinase (Table 2). The wine fermented with 50 g/hL bentonite required 4 lbs/kgal (0.48 g/L) bentonite post fermentation to achieve stability (Table 2).

In a triangle test comparing wines that had been fully stabilized, 11 out of 25 respondents were able to distinguish which wine was different, indicating the wines not significantly different (Z=0.91, p=0.18 ). There were no significant differences in scores for aromatic intensity (F=0.108, p=0.746), fruit intensity (F=0.271, P=0.608), palate volume (F=2.692, p=0.116). Descriptive scores for oxidation were nearly significantly different, however, with the wine receiving the low level of Fermobent averaging 3.091 while the high level averaged 3.636 (F=3.750, p-0.06). Several taters mentioned in open ended questions an during discussion that the residual sugar in the wine was the most prevalent sensory effect; all others were muted by this. 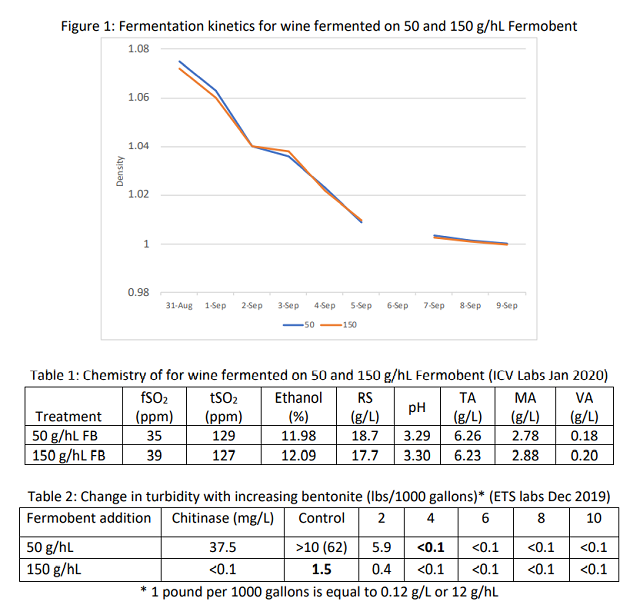 Reducing Bentonite use in Vidal (2019)