Many of the white grape varieties grown in Virginia contain high protein content. Pino Grigio is known for its high degree of protein instability, yet over fining is a concern given the delicate aromatic profile of this wine. At Ingleside, it is common to add 40 g/hL bentonite to Pinot Grigio at fermentation and still have a sizeable bentonite addition before bottling. This study tested the effect of additional protein-reducing steps including addition of protease enzymes and tannin at the juice stage. Despite these extra additions, the control wine and treatment wines were still very unstable, requiring an additional 107 and 119 g/hL of bentonite, respectivly, to achieve stability in the finished wine. Sensory analysis revealed no difference in aromatic intensity between these wines.

Many of the white grape varieties grown in Virginia contain high protein content. For winemakers who use CMC products such as CelStab (Laffort) or Claristar (Scottlabs) to prevent tartrate crystal formation in the bottle, wines must be protein stable to avoid interactions between proteins and CMC that cause haze formation. However, stabilization often requires large doses of bentonite that can potentially strip flavor. Pino Grigio is known for its high degree of protein instability, yet over fining is a concern given the delicate aromatic profile of this wine. The literature is mixed regarding the overall sensory impact of using bentonite during fermentation versus fining after fermentation.

At Ingleside, it is common to add 40 g/hL bentonite to Pinot Grigio at fermentation and still have a sizeable bentonite addition before bottling. This study aims to explore the effect of additional protein-reducing steps such as protease enzymes and tannin addition at the juice stage on later protein stability and sensory characteristics.

Two treatment regimes were included in this study, the standard protocol for the winery and a protocol recommended by Enartis for protein removal early in processing. Details can be found in Table 1.  Briefly, the standard protocol included fermenting on 40 g/hL bentonite.  The Enartis protocol includes a pectinase with specified protease side activity as well as tannin addition to precipitate protein, along with bentonite. The rationale of these additions is that, though a single product alone reduces protein by 15-20%, when added together, they may reduce protein load enough to prevent instability (Eglantaine Chauffour, personal communication).

Fruit was whole cluster pressed with 50 ppm SO2 into a single tank. Immediately after pressing, juice was divided into two separate vessels, one for each treatment, with care taken to ensure the tank was well mixed prior to division. Tanks were gauged before additions are made.

Respective protease additions for each protocol (Table 1) were made prior to juice cooling and allowed to incubate for 2-3 hours before portable tanks were moved to the refrigerator for cold settling. After 2 days, settled juice was racked to stainless steel barrels (200 L each) for fermentation. Tannin addition (10 g/hL Tan Blanc) was made to the barrel receiving the Enartis protocol barrel prior to inoculation, after which both barrels were inoculated with BA-11 (20 g/hL) rehydrated in Go-Ferm (17 g/hL). Fermentations were carried otu in a refrigerated trailer for temperature control and were monitored daily for brix and temperature. The following additions were made to each of the barrels on the third day of fermentation: 3.5 kg/hL sugar, 3 g/L tartaric acid, 20 g/hL Cassein, 20 g/hL Fermaid K, 40 g/hL bentonite. Brix readings were at 15 and 13.5 for the standard and Enartis protocols, respectively. At the completion of primary fermentation, 50 ppm SO2 was added and barrels were topped. Wine was aged on lees without stirring until sampling for the WRE.

Sensory analysis was completed by a panel of 30 wine producers. Wines were presented blind in randomly numbered glasses. Tasters were presented with three wines, two of one type and one of another, and asked to identify which wine was different (a triangle test). There were three tasting groups with the unique wine in the triangle test balanced between groups. Tasters were then asked to score the aromatic intensity of each wine on a scale of 0 to 10. They were also given open ended questions to describe the wines. Results for the triangle test were analyzed using a one-tailed Z test. Descriptive scores were analyzed using repeated measures ANOVA.

Juice chemistry was the same between treatments (Table 2), leading to very similar wine chemistry (Table 3). The lot fermented with the Enartis protocol has slightly higher residual sugar and slightly lower volatile acidity. Fermentation kinetics were much the same (Figure 1) though the barrel receiving the Enartis protocol fermented slightly faster. For example, from the 4th of September onward, there was a difference of 3°Brix between the two barrels. The barrel receiving the standard protocol was measured Brix dry 3 days after the barrel receiving the Enartis protocol. This was not a function of temperature, as the temperatures between the two barrels was never more than 0.7 degrees, and had an average difference of 0.2 for the duration of fermentation. (This indicates a temperature difference in one direction was offset by a difference in the other direction on subsequent days.) Proteins stability testing by Enartis Vinquiry showed that 107 g/hL Bentolit Super Bentonite was needed achieve stability in the control. In the treatment, 119 g/hL was needed.

In a triangle test, 19 out of 30 respondents were able to distinguish which wine was different, indicating the wines were significantly different (Z=3.29, p=0.0006). However, panelist comments indicate there was a difference in visual appearance (cloudiness) in the treatment wine that may have impacted this result. There was no significant difference in descriptive scores for aromatic intensity. 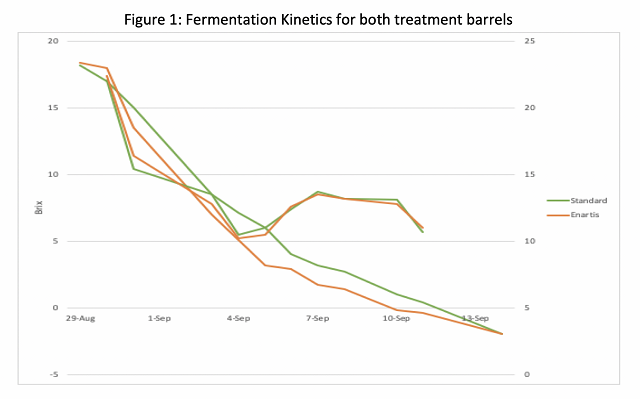