Many white and rose wines produced in Virginia have high levels of protein instability, requiring high levels of bentonite to achieve protein stability. Some winemakers are reluctant to add large amounts of bentonite to wine due to potential stripping of aromatics and flavor. One possible solution is to ferment in the presence of bentonite. In this experiment, Veritas fermented Sauvignon Blanc with and without bentonite, then fined each resulting wine to stability for sensory analysis. Fermentation on 40 g/hL bentonite produced a more stable wine, however when fined to stability the overall difference in bentonite use was only 10 g/hL. In a ranking test, wine produced with 40 g/hL bentonite but not fined to stability was preferred over wine fermented without bentonite. This wine also scored highest for thiol intensity and body. There was no significant difference in preference for protein stabilized wines.

Many of the white grape varieties grown in Virginia contain high protein content. For winemakers who use CMC products such as CelStab (Laffort) or Claristar (Scottlabs) to prevent tartrate crystal formation in the bottle, wines must be protein stable to avoid interactions between proteins and CMC that cause haze formation. However, stabilization often requires large doses of bentonite that can potentially strip flavor. Sauvignon Blanc is known for its high degree of protein instability, yet over fining is a concern given the delicate aromatic profile of this wine. The literature is mixed regarding the overall sensory impact of using bentonite during fermentation versus fining after fermentation. Prior to this experiment, the standard procedure at Veritas was to ferment Sauvignon Blanc without bentonite, test the protein stability after fermentation, then fine with bentonite prior to bottling. In this experiment, the standard protocol was compared with using bentonite during fermentation for overall protein stability and sensory effects after full stabilization.

Fruit was harvested and whole cluster pressed on the Europress Champagne press cycle, with the press fraction extracted at step 21 with the addition of 70 ppm SO2 to the press tray. Juice was cold settled at 45°F with addition of 1.6 ml/hL Cinn Free for two days, then racked to two separate but identical tanks. Both tanks were inoculated with 20 g/hL Alchemy II Yeast rehydrated in 6 g/hL Fermoplus Energy Glu (AEB). Fermentation temperature was set at 54°F and was raised to 60°F as the fermentation progressed. Fermentations were monitored daily for brix and temperature.

At ⅓ fermentation, 40 g/hL Pluxbenton N was added to the treatment tank only.

Completion of fermentation was confirmed with enzymatic analysis of residual sugar.  When dry, 40 ppm SO2 was added. Wine was cold settled to remove lees, then racked to stainless steel barrels for aging. After fermentation was complete, in-house protein stability analysis was completed to determine the amount of bentonite needed to achieve stability for both control and bentonite treatments. Testing consisted of measuring turbidity of the wine, heating the wine to 80°C for 2 hours, cooling the wine, then measuring tubidity after heating. A difference in turbidity less than 2.0 NTU was considered stable. By pre-fining the wine with known additions of bentonite, a range can be determined between which a wine will reach stability. Appendix A includes a supplemental experiment examining the effects of different amounts of heating time on the predicted outcome.

After heat stability testing, a portion of each wine was treated at the level predicted by the test to achieve stability. Four samples were used for sensory analysis (Table 4).

Sensory analysis was completed by a panel of 26 wine producers. Wines were presented blind in randomly numbered glasses. Panelists were asked to rank the wines in order of preference, then score each wine on a scale of 0 to 10 for thiol intensity (a characteristic aroma of Sauvignon Blanc) and body. Homemade thiol standards were available, however tasters were not trained to a given scale, so differences in intensity were not standardized. Panelists were also given open ended questions to describe the wines.

There was no difference in juice chemistry at racking (Table 1) nor in the finished wine chemistry (Table 2). Fermentation kinetics were not affected by the presence of bentonite (Figure 1).

Initial in-house heat stability testing showed a difference in NTU of 97.3 for control and 38.6 for treatment. The following formula was used to approximate a range of concentration of bentonite for testing. This formula was developed using KWK bentonite and is an estimate ONLY. It should not be used to determine bentonite addition rate without confirmatory testing:

By this method, the estimated bentonite addition for the control wine would be 145 g/hL while the addition for the treatment wine would be 60 g/hL. In-house trials were run at 50, 75, 100 and 125 g/hL. Results are shown in Table 3. Enartis Vinquiry labs also tested these wines using Bentolit Super and found a rate of 120 g/hL was needed to stabilize the control while a rate of 72 g/hL would be needed to stabilize the treatment. 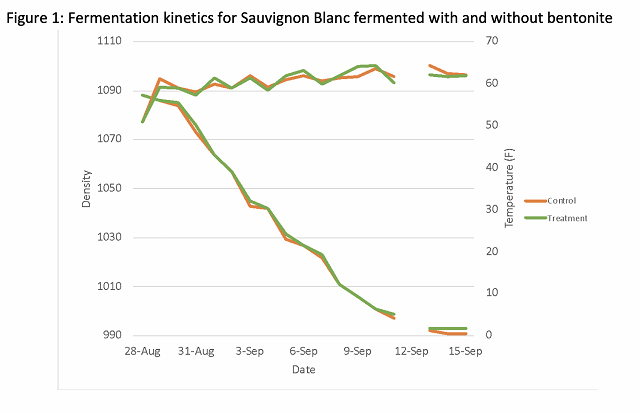 In a trial of 26 tasters, tasters were asked to rank all 4 wines (shown in Table 4) 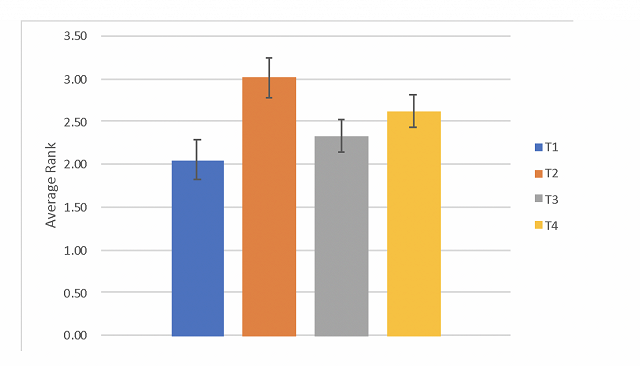 Using Friedmans’ Non-parametric Test for ranked samples, the only significant difference in preference was between T1 and T2. Here, T2 was significantly preferred over T1 (Q=8, p=0.047).  There was no significant difference in preference among the other treatments, though T1 had the lowest average ranking. Taster comments who preferred T2 indicate they felt this wine was cleaner with more brightness. This indicates that though there is belief in bentonite stripping flavor, bentonite treatment did not significantly alter preference among wines in this case.

Appendix 1: Comparing results of a 30 minute benchtop test with a 120 minute test

The standard protein stability bench test at Veritas includes heating wine at 80 °F for 2 hours, cooling, then reading the resulting difference in turbidity.  Others (for example, King Family) run the same test for 30 minutes. For this study, Veritas ran the trial twice, once at each time interval. The results are shown in Table 4 and Figure 1.

From these data, the estimated treatment of bentonite needed for stability is as follows: 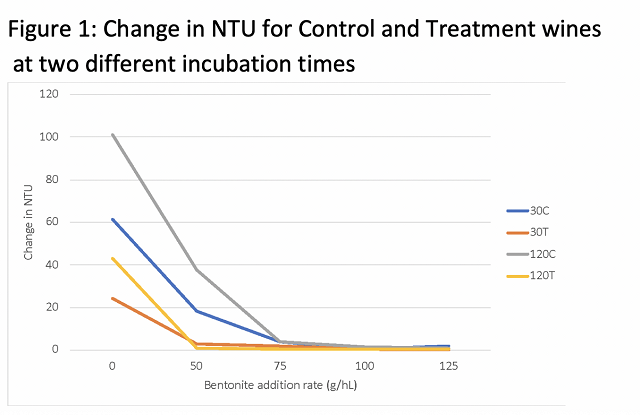