This study examined two blocks of Petit Verdot vines at Barren Ridge Vineyards. Measurement of soil conductivity by Bubba Beasley at Hydro Geo revealed areas of different conductivity within both Petit Verdot blocks: “low” conductivity and “high” conductivity.  These areas were harvested and vinified separately. Soil conductivity did not correlate with differences in grape sugar accumulation or pH values. Differences in grape phenolics were found in one block but not the other. Wine produced from theses grapes showed little difference in phenolic content, however, wines produced from high conductivity soils consistently had lower pH in both blocks. Furthermore, this trend was consistent over all three years of the study (2017 – 2019). If conductivity is due to clay content, this is a contradictory result. However, at Barren Ridge, soil pits revealed that high conductivity correlated with high rock content, which likely allows better water drainage and thus lower pH in the wine.

This was the third year of a 3-year study by Bubba Beasley in partnership with Barren Ridge Vineyards and the Virginia Wine Board to explore the relationships among soil nutrients, plant tissue nutrients, fruit chemistry, and final wine chemistry. Preliminary data from 2017 and 2018 showed differences in fruit and wine chemistry but did not show significant differences in wine sensory characteristics. Additional soil data points were added in 2018 and protocols for plant tissue monitoring were revised, allowing for a finer scale determination of blocks for harvest

To allow functional winemaking units, 0.75 tons (60 lugs x 25 lbs) were picked for each treatment combination on the same day. All winemaking operations including timing and amount of additions were the same between treatments. Fruit was destemmed without crushing with the addition of 5 g/hL liquid SO2 (as a 5.5% solution). No bleeds were done on the experimental lots. Fruit was inoculated with 20 g/hL D254 immediately after processing.  No acid or sugar additions were made. Fermentations were monitored daily from the time of destemming. Tbins were kept side by side on a covered crush pad with ambient temperature near 75°F. Nutrient additions were not made as YAN was sufficient.

Both treatments were drained and pressed the same day, after the completion of alcoholic fermentation. Wine was racked to identical (neutral) barrels. Wine was monitored for malolactic depletion using paper chromatography, with enzymatic confirmation through the Virginia Tech Analytical Service Lab when complete. At the completion of malolactic fermentation, 3 g/hL SO2 was added.

There was no notable difference in Brix or pH between high and low conductivity lots for VSP or Ballerina trellised Petit Verdot (Table 1). Fermentation was robust and progressed without incident for all treatments (Figure 1). The pH of the finished wine was higher (with lower TA) in the wine from low conductivity soil in both trellis types (Table 2), implying a potential difference in potassium content in the grapes (not measured).

This was the third year of the study, allowing a comparison of effects in different vintage years. The 2017 vintage was characterized by unusually hot temperatures and below average rainfall, leading to occasional drought conditions for vines1. Yields in 2017 were relatively high1. By contrast, 2018 included the highest recorded rainfall in history for much of the state, with consistent rain throughout the growing season and occasional flooding2. Yields were lower in 2018 due to weather conditions2. The 2019 growing season was very warm with dry conditions, however most vines stayed hydrated due to adequate groundwater from 20183. Vines had ample growing time after early budbreak without frost, and yields in 2019 were high3. Different soil water conditions, as seen in 2017-2019 do affect the electrical conductivity of the soil, but the difference between zones remains consistent. Therefore, though the absolute conductivity may change, if a zone is lower in conductivity in a wet year, it will also be lower in conductivity in a dry year4. However, the response of vines to available water may change from year to year, with extreme events like flooding (2018) or drought (2017) adding additional stressors.

As shown in Table 6, there were no consistent differences in grape size, Brix, pH, or grape phenolics at harvest. Likewise, wine phenolics showed no strong trends. The only consistent trend was the difference in wine pH with the conductivity of the soil. In each year, whether VSP or Ballerina trellis, the higher conductivity soil produced wines with lower pH. The magnitude of this difference ranged from 0.14 – 0.2 pH units, and often meant the difference between wine aging below 3.8 and above this benchmark for Brettanomyces infection.

The finding of lower pH with higher conductivity is contrary to what would be predicted based on electrical conductivity alone. High electrical conductivity measurements usually indicate a high cation exchange capacity and high water holding capacity, as found in heavy clay soils4. With an acidic pH (ranging form 4.8 to 6.3), these soils would be predicted have ample available potassium, held on clay particles and readily exchanged after plant uptake5. Potassium deposition in grapes would be expected to increase the pH. This means higher conductivity soils should lead to higher pH wines relative to lower conductivity soils with less available water and potassium.

Indirect methods such as EC should also be followed up with direct methods, such as digging pits, soil sampling, and testing of plants and fruit, as high or low EC could be caused by a number of factors6. Soil analysis from these blocks done by Bubba Beasley from Hydro Geo found that high conductivity plots at Barren Ridge contained a high proportion of rock content. Due to their compact structure, rocks have high conductivity without exchanging ions or holding water. The large amount of rock in the soil may be driving up the conductivity in the “high” plots while allowing for better water drainage overall, ultimately driving down potassium availability for the vines. At Barren Ridge, the texture of the soil (rock content) seems to have a strong influence on the conductivity and obscures the prediction of pH effects. 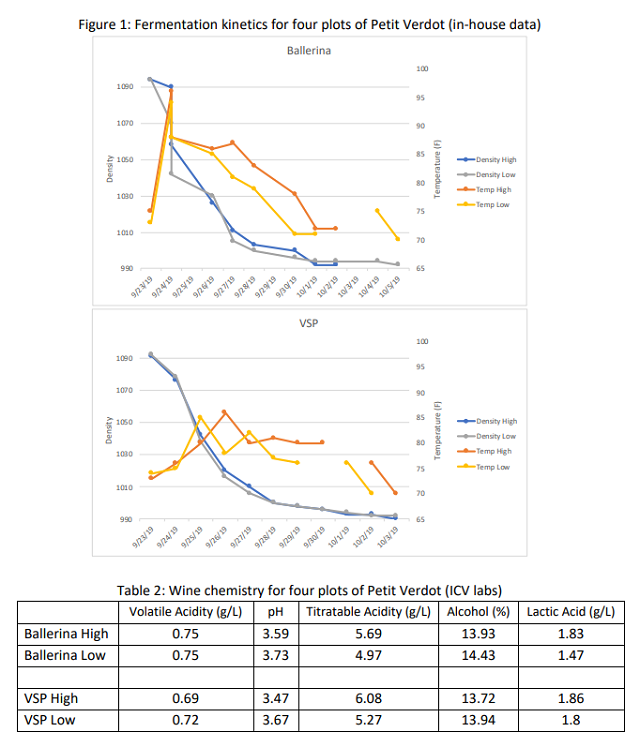 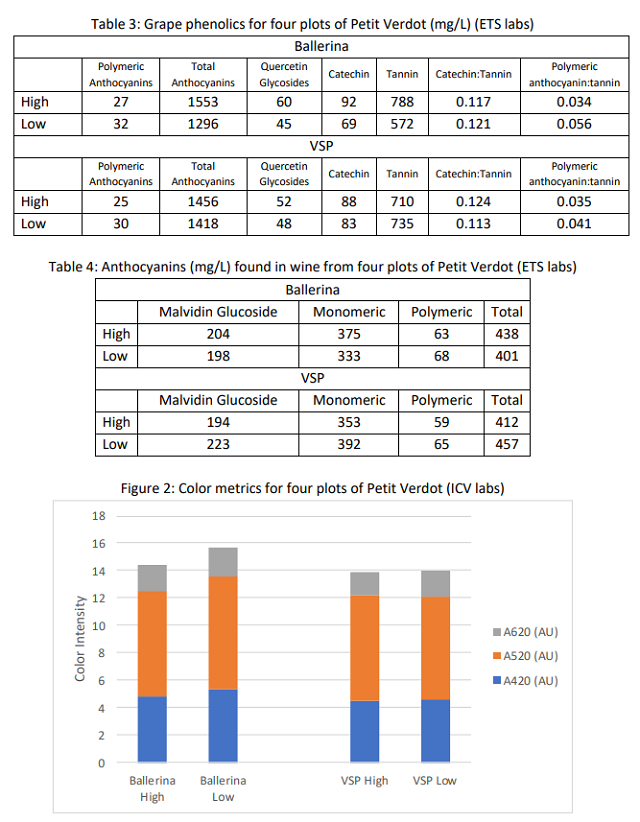 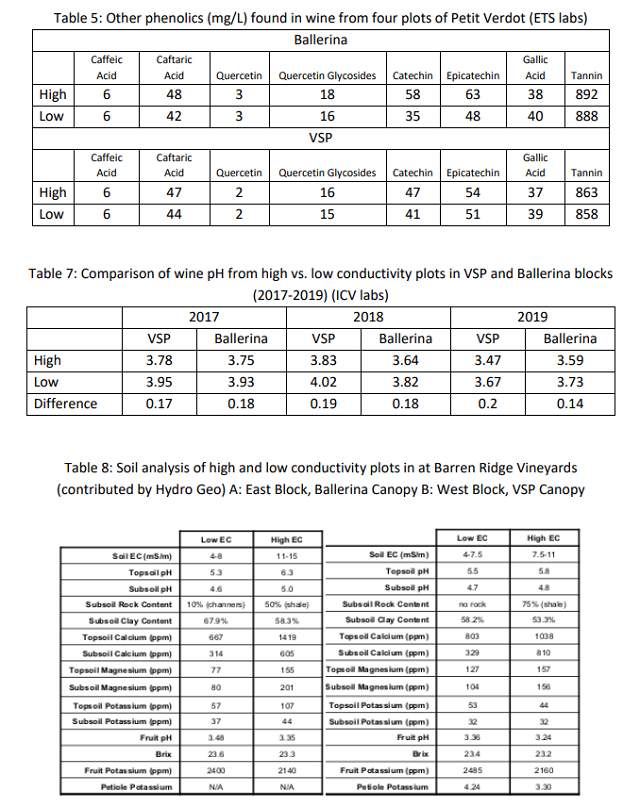 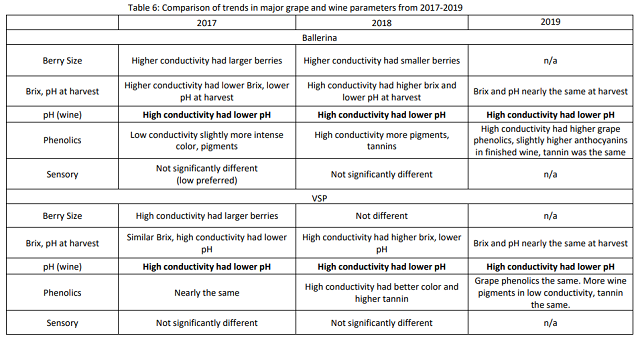