This study examines the effect of two bio-fertilizing soil amendment products on vine vigor, fruit ripening, fruit chemistry, and the quality of the resulting wine. Both products were chosen because product information included claims to limit uptake of potassium from soil. A 1.3 acre block of Cabernet Franc (clone 327 on 101-14 rootstock, planted in 2015) was split into three 0.35 acre sections to be treated as control, Vastly Free Fulvic Acid, and BlueVite (Enartis). There were no differences in vegetative growth among treatments, and potassium levels in grapes and finished wine were the same. Wine made from both treatment blocks had higher anthocyanins and tannins, and higher perception of astringency and structure, than control.

Though overall soil fertility is rarely a problem in Virginia, this study examines the effect of two bio-fertilizing soil amendment products on vine vigor, fruit ripening, fruit chemistry, and the quality of the resulting wine. Both products were chosen because product information included claims to limit uptake of potassium from soil. Excess potassium, a common occurrence in Virginia2, is thought to contribute to high pH values, especially in red wine varieties. Two products were tested: Vastly Free Fulvic Acid and BluVite (Enartis)

Vastly is a mix of fulvic acid (30%) and organic matter (60%). According to the manufacturer, fulvic acid works to change the soil architecture, which increases porosity, improving water retention and drainage. It is also claimed to improve buffering capacity and cation exchange, while also improving microbial health. In a previous study of the effect of foliar fulvic acid application, Pospescu and Popescu (2018)1 found that treatment with fulvic acid increased total leaf area, yield (as berry weight and berry volume), and total soluble solids in two Romanian varieties of Vitis Vinifera. Increases in total soluble solids were significant and meaningful, increasing on variety from 17°Brix to 19.1°Brix at the highest rate of application. The other variety increased from 19°Brix to 21°Brix with foliar fulvic acid treatment. This team also recorded higher rate of photosynthesis in treated leaves, indicating fulvic acid may play a role in signaling metabolic pathways inside the plant.

BluVite (sold though Enartis) contains a blend of elemental sulfur, magnesium sulphate (Kieserite), and protein hydrolases. Originally developed by BluAgri in Italy, it is meant to restore the microbial fertility and biodiversity of the soil. By stimulating microbes in the rhizosphere, it is thought to improve nutrient cycling to roots, improving root growth and density. Claims for this product include an increase in uptake of soil nutrients and increased tolerance to abiotic stress.  Other benefits include improvements in soil structure, fertility, nitrogen fixation and phosphorous solubility.

Despite claims to improve potassium uptake, both products also have the potential to increase already high overall soil fertility, leading to excess vegetative growth and higher yield at the expense of quality. The purpose of this study was to determine if either soil amendment product could improve wine pH without a loss in overall quality due to excess vegetative growth or yield.

A 1.3 acre block of Cabernet Franc (clone 327 on 101-14 rootstock, planted in 2015) was split into three 0.35 acre sections. Rows 75-77 were treated with Vastly, rows 78-82 were kept as control and rows 83-92 were treated with BluVite. Initial soil analysis for this block can be found in Appendix A.  Due to the nature of the product (affecting the soil microbiome), randomizing treatments throughout the vineyard was not possible. Each product was applied according to the manufacturer’s instructions in terms of dilution, application and timing (Appendix B). Vastly was applied three times throughout the growing season: post flowering, at pea size, 2 weeks after pea size. BluVite applications were made at bud burst and at the beginning of flowering. With the exception of soil treatments, all other vineyard and winery operations and treatments were kept the same for all blocks. Petiole analysis was conducted at véraison (50 percent of berries colored).

To assess fruit ripening, one randomly selected row was designated for fruit sampling within each treatment area with buffer rows between treatments due to drift effects. Each week, a single location consisting of ten consecutive vines (2 panels) within a row was pre-determined by random assignment (Appendix C). If a vine was missing within a panel, sampling was moved to the next adjacent panel. Sampling for ripening kinetics was done weekly beginning the week after veraison (Aug 19th) and continuing through harvest. Two fruit samples were taken from the same 10-vine sampling location:

Each berry sample was taken by selecting 20 berries per vine across ten vines for a total of 200 berries. The 20 berries were selected at random from four different clusters per vine by systematically sampling the top, middle, and bottom of two clusters each on the north and south aspects of the trellis. This 200-berry sample was split in two for sample processing: 100 berries were used for determination of Brix, pH, TA and berry weight by King Family while the remaining 100 berries were frozen and later used for WRE protocol development and analysis. Clusters were sampled from 8 “inner” vines of the sampling location with 2 clusters taken per vine, with care taken to include inner and outer clusters, clusters proximal and distal to the trunk. Cluster samples were frozen and sent to Enartis for testing of average berry weight, sugar uploading, phenolic measurements and chemical composition. Foliar surface area for each treatment was calculated by measuring the height and width of the canopy at three points within a vine for ten vines per treatment. The number of leaves per shoot and internodal distance was also noted for each vine.

All treatments were harvested the same day, and all winemaking operations were the same between treatments. Fruit was hand harvested and chilled overnight prior to processing. The following day, fruit was destemmed and lightly crushed with the addition of 1.5 g/hL SO2. There were no additions of enzyme or tannin and no bleeds were done. Each TBin was inoculated with 12 g/hL ES488 yeast (Enartis) rehydrated in water and juice. Acid addition (2 g/L tartaric, 0.5 g/L malic) was done early in fermentation, as soon as a cap formed. Wine was pressed when dry, settled overnight then transferred to barrels of similar cooperage and age for malolactic fermentation. No inoculation was made. The progress of malolactic fermentation was checked every week with paper chromatography and completion was confirmed with enzymatic analysis, at which time 66 ppm SO2 and 3 g/hL Chitosan were added with no racking.

There were no differences in canopy height or width based on treatment. (These vines were hedged during the course of the season.) Vines from Vastly treated soils had longer internodal distance and lower number of internodes, though these differences were not significant (Figure 1). Petiole analysis revealed high levels of nitrogen, potassium, and copper in all samples. Vines treated with Vastly had higher potassium and lower magnesium than the control or BluVite vines (Table 1). Grape potassium at harvest was also higher in the Vastly treated vines (Figure 2). There were no other large differences in fruit ripening measures among treatments (Figure 2).

Sugar level at harvest was very much the same among treatments (Table 2). The pH and TA values for juice are likely in error. The juice was frozen for transport, which likely caused precipitation of potassium bitartrate, leading to high pH and low TA measures. Finished wine chemistry was also very similar among treatments (Table 3).

Neither potassium in the juice at harvest (even if affected by freezing) nor potassium in the finished wine were different among treatments (Tables 2&3). Alteration of the potassium profile was one motivation for this trial. According to Gardener (2016), grape potassium in the range of 1056-2776 mg/L as seen in this study is considered to be “high” and wine made from high potassium grapes often requires additional intervention to maintain a reasonable pH.

There were small increases in phenolic measurements relative to control for each of the treatments (Table 4). These are small increases, but they are consistent with sensory observations of the winemaker and research coordinator. 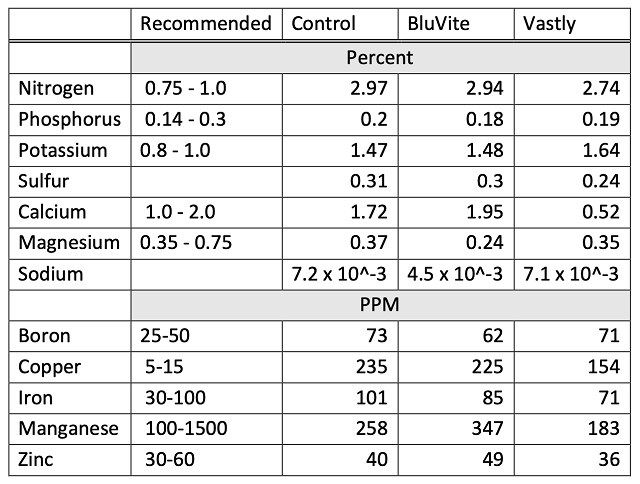 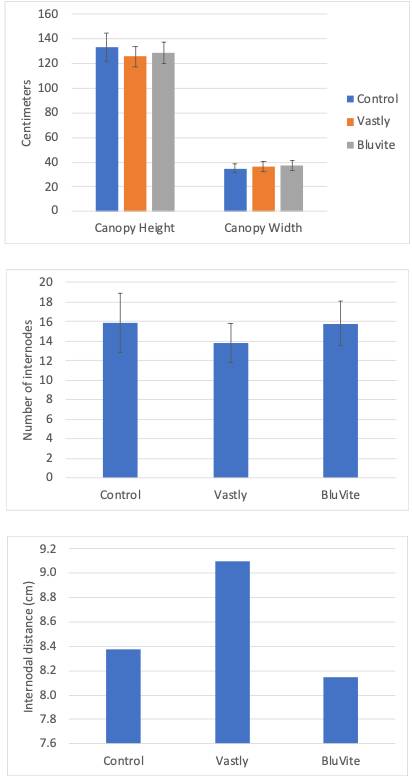 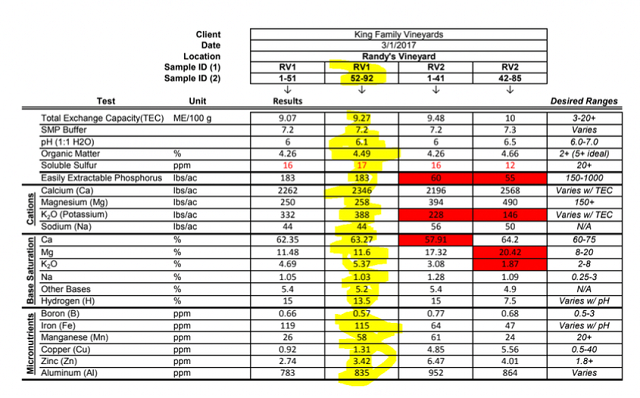 Appendix B: Manufacturer instructions for application

1st application: apply 2qt/a to the soil after pruning and right before or during basal budburst during ploughing down after which good suckering could be made.

2nd at fruit set stage when the grape is about the pea size;

For petiole analysis, collect 60 to 100 petioles of leaves at the same node as a cluster. Cut off and discard the leaf blades, rinse in water, blot dry, put in paper bags, and dry in an oven at 125ºF to 160ºF, if possible. If they cannot be dried immediately, get the samples to the lab as soon as possible. (For leaf blades, collect 20 to 40, remove and discard the petiole, rinse in water and blot dry on paper towels. Dry the leaf blades quickly after collection because they mold much faster than petioles.)

Select 60 to 100 petioles from recently matured leaves. This would be the second fully expanded leaf, usually the 6th to 7th leaf from the tip, on an actively growing shoot. The sample leaves should have the color and texture of the other mature leaves rather than the lighter and more shiny, tender appearance of young, expanding leaves. Treat as outlined above.

Note: Please follow your normal practice when collecting and processing samples. Data for each row should be recorded separately.

BluVite must be sprayed under the row (with a low volume tank), in order to obtain a uniform covering of the soil under plants at a dose of 18 kg/ha (16.5 lbs/ac) for each application. In young vineyards it is recommended to do two closeup treatments (1 month).

BluVite is a powdered formulation that must be dissolved in water before application. Because the product needs to access the root system, the volume of water needed will depend on rain events:

BluVite must be applied in two vine’s growing phases: 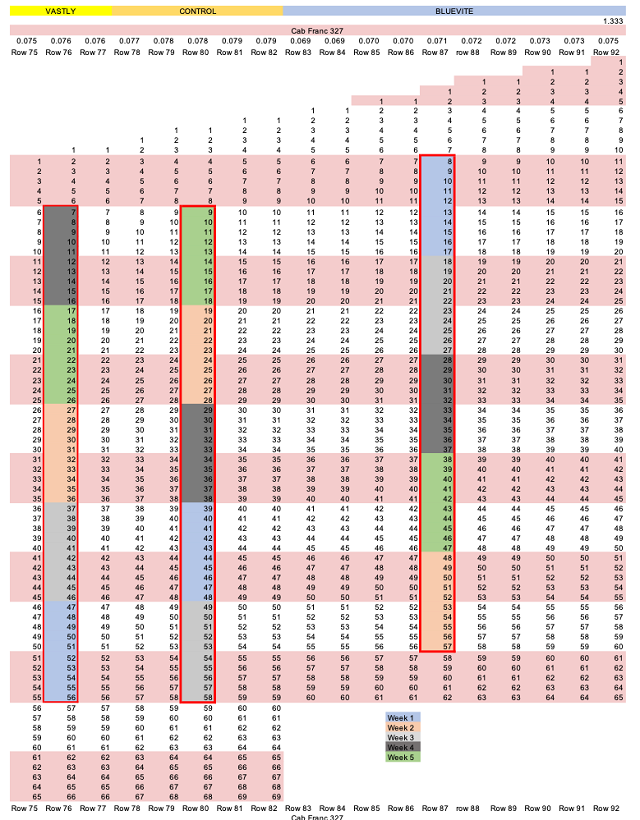