Protein instability is a widespread issue in Virginia white and Rosé wines. Bentonite is commonly used to improve protein stability, and nearly every manufacturer has one or several bentonite products for sale. When reading product descriptions, it can be difficult for the winemaker to know which product is right for his/her application, and if more expensive products are worth the added cost. The WRE has conducted several studies to test products for the ability to bind protein, compaction rate/volume loss of wine, overall price per volume treated, and sensory effects. To best understand why these products might be different, it is helpful to know where bentonite comes from.

Bentonite is a form of Montmorillonite clay mined from sites all over the world. In the US, bentonite is sourced from mines in Wyoming1. As a natural product, the base clay for any bentonite product is variable based on the site from which it was mined. After it is removed from the ground, bentonite is further processed at the manufacturer (“activated” and “granulated”), which can include the replacement of cations to improve binding efficiency and addition of silica to improve compaction rate. Bentonite can also be processed to improve hydration rates.

There are two main categories of bentonite products: sodium (Na) and calcium (Ca). Chemically this describes the predominant cation bound to sheets of tetrahedral silicon oxide and octahedral aluminum hydroxide (2). Practically, the difference in these types can be explained by the swelling capacity. When sodium bentonites are hydrated in water, the clay particles separate so they are on average 100 Angstroms apart. Calcium bentonites do not swell as much and remain on average 10 Angstroms apart (2). This difference in swelling has several consequences. Due to better swelling, sodium bentonites have more exposed surface area for protein binding, thus they tend to be more efficient (less bentonite is needed to achieve stability). However, this same swelling capacity means that sodium bentonites have fluffier lees, with an average of 5-10% of the volume lost during racking (1). Calcium bentonites form a denser lees layer, leading to less loss. Some sodium bentonites are processed with silica gel to improve compaction rates. Some calcium bentonites are “activated” by exposure to a wet slurry of sodium carbonate that causes the exchange of some sodium and calcium ions (2). If using a sodium bentonite, Zoecklein (1995) suggests combining bentonite fining with cold stabilization, as potassium bitartrate crystals will help compact bentonite lees.

In addition to differences in the major cations, bentonites can also differ in a number of other characteristics that affect binding efficiency. A study of the chemical and physical structure of four sodium-based bentonites3found notable differences in iron, magnesium, calcium, and sodium ions among the bentonites, as well as differences in their charge density per surface area, swelling potential, and pH3. Small differences in chemical substitution or mineral content can cause large differences in protein binding and bentonite compaction rate. These differences also affect how the binding curves change with environmental changes. For example, some bentonites are more affected by changes in pH than others (3).

In a study of 24 wines fined with 11 different bentonites, Blateyron et al (2007) found significant differences in binding curves of the same bentonite used with different wines as well as between different bentonites used on the same wine, indicating the complexity in the interaction between one and the other. This study was searching for a mathematical model to predict how much bentonite was needed to stabilize wine based on the starting instability and the bentonite used. Due to the many variables, the best estimates were still only accurate within 15 g/hL 50% of the time. Using additional information, a model could be built from one vintage that was 84% accurate, however, when applied to previous vintages it was highly inaccurate, correctly predicting bentonite rate only 33% of the time4, indicating significant vintage variation, and invalidating the model.

Several factors affect the binding of wine proteins to bentonite including the presence of other cations in the wine, ethanol content of the wine, and pH2.

The impact of each of these factors also depends on the chemical and physical structure of the bentonite being used. For all of these reasons, it is important to do any bentonite bench trials on the final blend of the wine, with all other fining steps and additions completed. Bench trials prior to blending should incorporate each of the possible changes that will be made prior to bentonite fining. 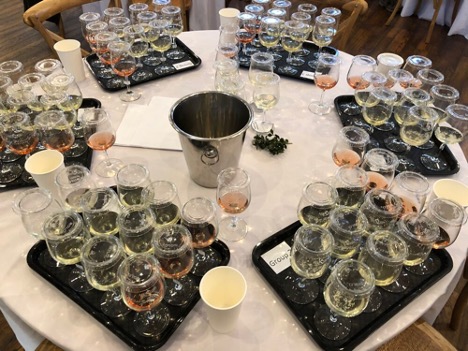 Given all of the differences between products, how is a winemaker to choose? Most product descriptions for bentonite include a listing of the predominant cation (sodium or calcium) as well as some description of the manufacturing process and the benefits of the given product. However, as described above, the exact interaction of a given bentonite with a given wine, and its effects on the overall attributes of the wine are hard to predict. The first concern for winemakers is the effect on sensory attributes. In their study of 24 wines and 11 bentonites, Blateyron et al (2007) tested the sensory impacts of each bentonite at its effective rate (the rate that led to a change in NTU less than 2.0). Of these pairs, only 4 wine/bentonite pairs were significantly different from control (unfined wine) in an A-not-A test. (In an A-no-A test, participants are given a standard and an unknown and asked to identify if the unknown was the same as the standard or different)(4). In a study of protein fining in Sauvignon Blanc, Vela et al (2017) found no significant differences in ethyl esters or acetates, and no impact on aroma in sensory analysis, despite high addition rates (100 g/hL) needed to achieve protein stability (5). A review of the literature shows mixed results of sensory effects of bentonite fining at all, and no real guidance on type or specific products that may have less sensory impact.

Another major concern with bentonite is volume loss. Waters et al (2005) cites an estimate that the cost of bentonite fining of wine per year is on the order of $300-500 million6 while Robinson et al (2012) cites a figure of $1 billion (7). These losses are largely due to wine lost during racking off bentonite lees. If 5-10% volume is lost at this step1, these costs add up quickly.