Despite the potential drawbacks, bentonite is the most commonly used fining agent for proteins. In some cultivars grown in Virginia, such as Sauvignon Blanc, Pinot Gris, Petit Manseng and Traminette, large doses of bentonite (100 g/hL, 7.5 lbs/1000 gallons) are needed to achieve stability. This leads to concerns over flavor stripping as well as overall loss of wine due to large amounts of lees. Other options are being explored to work in conjunction with bentonite to improve its effectiveness, or to replace bentonite altogether: 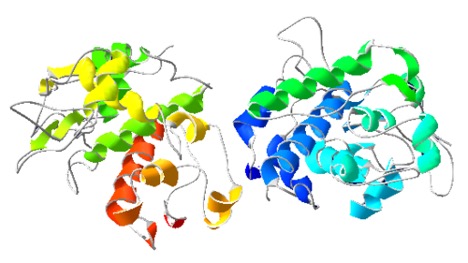 Figure 1 Structural rendering of Chitinase, the principle unstable protein in wine. From https://www.creative-enzymes.com/similar/chitinase_122.html

One approach to reducing protein instability is the use of a targeted enzymes to break unstable proteins into smaller pieces to either take them out of solution earlier or to make them less likely to form a haze. However, several considerations make this difficult. The pathogenesis-related proteins responsible for protein instability are generally resistant to proteases, and, most protease enzymes don’t work well at wine pH and temperature (Robinson et al 2012, Waters 2005)(1,2).

Despite these challenges, Australian Wine Research Institute (AWRI) has reported work on the use of a targeted protease to treat protein instability in wine2. Treatment involves first heating juice to 70-75°C (158-167°F) to cause the proteins to unfold, then treating with proctase enzyme, which has a good activity at juice pH. Since the proteins have unfolded they are more susceptible to protease attack. Heating the juice also increases enzyme activity. When tested at both the laboratory and production scale, treatment with proctase showed efficacy comparable to bentonite in removing chitinase proteins. In a triangle test, a sensory panel was not able to distinguish wines fined to stability with bentonite from those treated with heat and proctase. It is difficult to assess if this treatment achieves protein stability, since the most commonly used test, heating the wine to 80°C for six hours, is really a measure of overall protein content. By its nature, proctase is not removing all proteins, only the unstable ones. AWRI is working on developing a test that is better suited to assess true protein stability in the winery (2).

Proctase is not yet widely available, and most wineries do not have the equipment needed to heat the wine to the prescribed temperatures for treatment. However, many some pectinase enzyme mixtures have some protease activity. Use of pectinase mixtures with known protease activity has been suggested to decrease help break up unstable proteins in juice. Practically, this may not reduce protein content enough to achieve stability on its own but may be included in an additive strategy along with tannins and bentonite during fermentation to achieve stability in the finished wine (Eglantine Chauffour, personal communication). This approach is one of several interventions suggested by the Enartis Total Protein Stability protocol, tested by Ingleside in 2018.

Tannin addition is another component in an additive strategy. In this approach, tannin addition is used to react with proteins at the juice stage. Tannin is often used as part of rot protocol to remove laccase (a protein) from juice. It has been shown that hybrid grapes have lower levels of tannin due to high protein content indicating an active binding of protein with tannin in grape juice and must3. Addition of selected exogenous tannin has been suggested as a possible mechanism to remove overall protein load from juice to reduce instability later4. Enological tannins are added to the press pan or at juice settling and left behind when juice is racked prior to inoculation. This has the added benefit of antioxidant protection during settling. Tannin addition is also part of the Enartis Total Protein Stability protocol.

Chitinase, the primary offender in protein instability, is an enzyme meant to act against chitin. Chitin is a component of the cell walls of organisms in the Kingdom Fungi (chitinase breaks these down to kill invading fungi) but is also found in the exoskeletons of crustaceans and insects. It is the second most abundant polysaccharide found in nature5. The most direct way to reduce chitinase in wine would be use chitin as a fining agent. When tested in bench trials, the addition of chitin resulted in dose-dependent removal of chitinase with up to 80% reduction in haze with much less reduction in overall protein (6). However, organoleptic and chemical effects of fining were not evaluated. Also, chitin is not currently a legal additive to wine.

Chitosan is a legal additive to wine. It is produced industrially by the de-acetylation of chitin, and therefore retains a structure similar to chitin. It is also found naturally in the cell walls of some fungi5. Trials using 1 g/L chitosan to stabilize Muscat showed an almost complete reduction in chitinase and near stabilization of the wine (NTU of treated wine was 2.10) as well as removing potassium, calcium and iron (Ndlovu et al 2019). Removal of these metals can aid in tartrate stabilization and reduction on oxidative capacity. However, treatment also showed a reduction in acidity (tartaric acid decreased by 0.65 g/L, malic acid decreased by 0.46 g/L) as well as reductions in free Terpenols, important aroma compounds in Muscat. In addition, chitosan is currently very expensive ($1/gram), so treatment of wine at this level would be cost prohibitive. 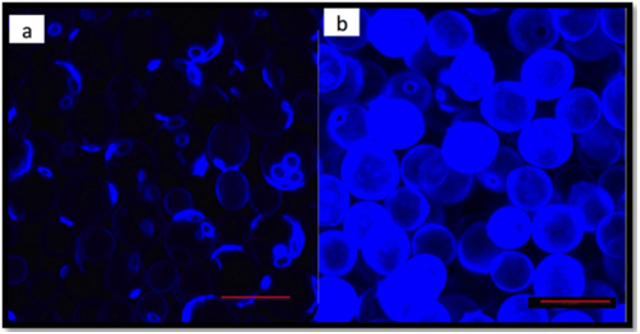 As members of Kingdom Fungi, yeast also have chitin in their cell walls. An alternative to using exogenous chitin or chitosan is to increase the chitin already found in the cell walls of yeast. In a study of yeast cell wall chitin, Ndlovu et al (2018) measured chitin content in yeast cell walls, as well as the ability of yeast lees to reduce protein instability. They found that cell wall chitin was variable based on yeast species as well as the environmental conditions in which the yeast were raised. Saccharomyces paradoxus strains had much higher levels of chitin and produced wines with less chitinase after fermentation. Post-fermentation fining with S. paradoxus yeast hulls also reduced chitinase concentration in the resulting wine. Cell wall chitin levels were higher in cooler fermentations (15°C vs. 37°C) as well as when calcium was added to the growth medium (7). These findings lead to the potential of raising S. paradoxus strains specifically for chitin expression to be used in chitinase fining.

The role of polysaccharides and polyphenols

Protein haze is not entirely due to protein, but rather a complex of proteins, polysaccharides and polyphenols. In a study of the effect of wine composition on protein stability, Mesquita et al 2001 showed that the polysaccharide fraction of wine affected the characteristic behavior of a wine to become turbid under moderately high temperature (40-50°C, 104-122°F)(8). Pectin has been shown to be important in haze formation1. In an approach that alters the protein and polysaccharide fraction of the wine, Spada (2019) outlines a protocol using of Scottzyme KS, a mixture of protease and pectinase enzymes developed to settle juices that were hard to filter.  The study posits that heat unstable proteins are present in a colloidal state and therefore less available to bentonite, and suggests treatment of wine with 0.079 ml/L Scottzyme KS, 12-24 hour incubation, followed by bentonite addition. In this trial, treatment reduced instability by 82% relative to bentonite only.  KS is a broadly acting enzyme mixture, so it may affect aromas and flavor. No information is given on the effect of KS treatment on chemistry or organoleptic properties of the treated wines4.

Mannoproteins, another type of polysaccharide, have been shown to decrease the size of protein precipitates, thus making them less visible1. This effect, along with chitin in cell walls of yeast, is likely why wines that have been aged on lees have lower levels of protein instability than younger wines or those not aged on lees.

When protein precipitates in wine are analyzed, they often contain proteins, polysaccharides and polyphenols. In fact, 50% of proteins in wine have been shown to be associated with phenolics. The hydrophobic nature of phenolics may stabilize hydrophobic portions of proteins that become exposed during unfolding holding them open and making haze more likely(1). Waters et al (2005) hypothesize that phenolic compounds may be a required element in haze formation (1).