There is not a good formula to predict how much bentonite is needed to achieve protein stability(1). Instead, winemakers use protein stability testing coupled with bentonite fining trials to determine the rate of bentonite addition. Because protein instability is usually caused by forces acting over time, the true effect is difficult to mimic in a rapid test. Several testing procedures have been utilized to assess protein stability (Table 1), however none of these directly measures the effect that would occur in the bottle. The question then becomes, which test best estimates the amount of bentonite needed to achieve stability without over fining the wine? 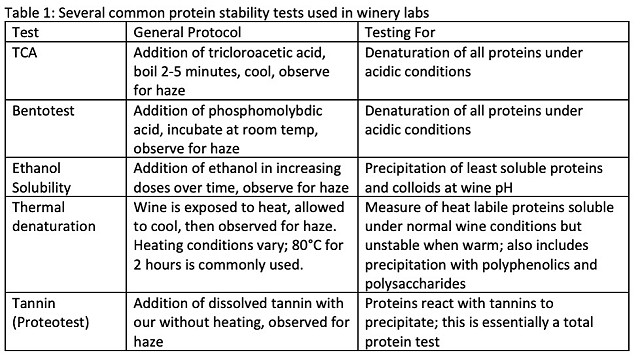 In all cases, the tests produced more precipitate than natural precipitation, 3-11 times more! When bentonite fining trials were done, the tests estimated that bentonite levels between 50-80 g/hL were needed for stability. The fast heat test and slow heat test both estimated stability with 60 g/hL, the average of the range of tests, and the tannin test agreed with the heat test for this wine.

Another way to look at this question is to test how good each procedure is at predicting actual instability. The Australian Wine Research Institute (AWRI) did a series of studies on this question (reviewed by Pocock et al) (3). In the first trial they compared the predicted bentonite fining rates from two versions of the heat test (heating to 80°C for six hours and two hours), as well as the Bentotest under three storage conditions:

Eight wines were tested by fining at several rates around the predicted rate, then storing the wine at each condition. All of the tests predicted bentonite rates that were sufficient to achieve stability under short-term severe conditions, however this often resulted in over fining (adding more bentonite than needed). For example, in all eight cases, the Bentotest predicted a fining rate above the lowest rate that needed to have a wine that was still bright after storage. The heat tests did better, over fining less often and by much lower amounts (3).

When compared, higher rates of bentonite were needed to achieve stability for long term storage than for short-term severe storage conditions. After three years of storage, three of the eight wines were under fined at the rate predicted by the heat test, meaning they had visible haze at the predicted bentonite rate. However, in a separate comparison of four wines fined to stability based on the two heat tests, Prostab and Proteotest, severe storage conditions required higher bentonite rates than ideal storage for 6 months and all of the tests predicted rates that over fined the wines. When considered together, these tests show that the accuracy of any given test will be different depending on what is causing the instability of the wine, as well as the intended storage conditions. 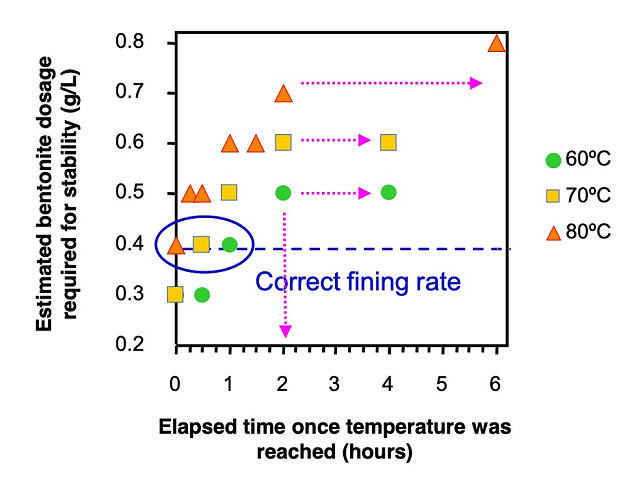 The most commonly used protein stability test is the fast heat test, however the temperature, time, and cooling procedures used with this test vary widely. In the AWRI literature, a heat test of 80°C for 6 hours has become the standard. Pocock et al (2018)(3) explains that this standard originated from a previous study testing heating times of 0-6 hours. Results showed that an the estimated fining rate needed for stability increased from 0.4 to 0.7 with increased incubation time for the first two hours. A fining rate of 0.8, the most stringent result, was estimated at 6 hours (Figure 1 from Wilkes , n.d). However, as shown above, heating for this long often overestimated the fining rate needed in storage tests. Estimation of fining rates at lower temperature were also lower (4), however, as shown by Estuelas et al (2009), the slow heat test (lower heat) did not precipitate thaumin-like proteins, known contributors to protein haze (2). The same AWRI study also looked at cooling times, showing that wines cooled for 2 hours would have passed (∆NTU<2.0) while the same wine cooled for 17 hours would not have passed, indicating haze formation depends on cooling time as well as heating time (4). Therefore, the most stringent result can be found at 80°C for 6 hours but this is likely to overestimate the amount of bentonite needed.

Another area of interest when discussing protein stability testing is the accuracy of the protocol itself.  In any lab testing situation, the test itself has inherent errors as well as common human errors that alter the accuracy of results. Several sources of error have been identified in laboratory-scale protein heat tests. To combat these, AWRI recommends the following:

In addition to the conditions of the heat test, the method of addition of bentonite during bench trials has been shown to have an effect on the outcome of the tests (5). Weiss et al (2001) investigated several aspects of laboratory bench trials on the predicted bentonite rate. They found no significant differences in outcomes based on pipetting of benchtop solutions, the age of the bentonite solution (one vs. thirty days), nor the rate of addition of bentonite solution (dropwise vs. steady stream). However, they found large differences based on the mixing speed of the addition, with fast mixing resulting in three times lower turbidity than slow mixing. They also found considerable variation between replicates, even with the same operator conducting the test. This affect was more pronounced at higher treatment levels (48 g/hL). They suggest running tests in triplicate to overcome this variation, which may not be practical in the winery setting. They found lower variation in unfined trials, so one alternative to replicates would be to re-test the wine after bentonite addition to ensure stability has been reached.

Lastly, it is imperative to conduct laboratory bench testing with conditions as similar as possible to those that will be used in the cellar. This includes using the same brand and lot number of bentonite, the same water for rehydration, and the same amount of time for hydration (4,6). The most difficult parameter to correlate is the mixing regime, however, based on the finding of Weiss et al (2001), differences can lead to very different outcomes. Another consideration is temperature. Bentonite is thought to bind protein very quickly, however, at colder temperatures, bentonite may settle faster and affect binding. Trials should be done at the same temperature as fining (6).

Also, based on the research for this article as well as the other newsletters on protein stability testing, a protocol was prepared for use in the winery laboratory. If your current protocol is working well, by all means, stick with it. However, if you are looking to add protein stability testing to your lab repertoire, or you feel your current protocol needs improvement, this may be helpful.