The standard protein stability bench test at Veritas includes heating wine at 80°C for 2 hours, cooling, then reading the resulting difference in turbidity.  Other Virginia wineries run the same test for 30 minutes. For this study, Veritas ran the trial twice, once at each time interval using two wines:

If stability is determined as a ∆NTU<2.0, the estimated treatment of bentonite needed for stability is as follows: 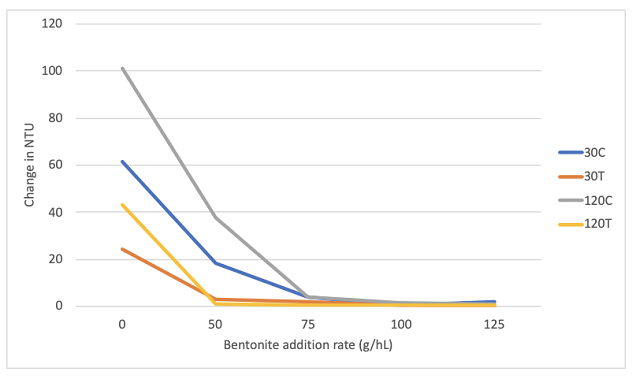 For the control wine, both tests predicted protein stability would be reached with a bentonite addition between 75-100 g/hL. The change in NTU is slightly higher for the 120 minute test, however this did not result in a change in predicted addition rate.

The different in turbidity between heating times decreased as bentonite addition rates increased and was very similar at rates achieving stability. This finding is consistent with the idea that once unstable proteins are removed, it no longer matters how long they are denatured, they will not produce haze.