Due to high levels of fungal pressure in the vineyard and pressure to pick before optimum maturity, Virginia white and Rosé wines including Sauvignon Blanc often suffer from high levels of protein instability. High levels of bentonite addition prior to bottling may strip delicate aromatics from these wines. Fermobent (Scottlabs) is a sodium-calcium based bentonite with low iron content that is formulated for addition to juice and recommended to be used at high rates of addition during fermentation to fine protein. This experiment compares Sauvignon Blanc wines made from two treatments: fermentation on 40 g/hL Pluxbenton, fined to stability after fermentation (control) and fermentation on 100 g/hL Fermobent, fined to stability after fermentation (Treatment). Both control and treatment wines finished fermentation with similar chemistry. The control wine required 12 g/hL additional bentonite while the treatment wine did not require any post-fermentaiton bentonite addition to achieve protein stability. Sensory analysis of stabilized wines indicated that the wines were very similar with no differences in thiol intensity, fruit intensity and palate volume. Vintage variation is common in protein stability. This approach should be repeated in subsequent vintages to determine if results are similar when higher levels of protein instability are present.

Due to high levels of fungal pressure in the vineyard and pressure to pick before optimum maturity, Virginia white and Rosé wines often suffer from high levels of protein instability. Sauvignon Blanc is a variety prone to high levels of protein instability even in vintages with relatively low fungal pressure. However, large bentonite additions needed to achieve protein stability are also thought to affect the delicate aromatics of this wine. One approach to avoid addition of large amounts of bentonite to finished wines is to ferment in the presence of bentonite. Experiments carried out during the 2018 vintage indicated that low levels of bentonite addition during fermentation (40 g/hL) did not make a notable difference in final stability or sensory attributes when compared with wines fined to stability after the completion of fermentation.

In 2019, a new product was made available on the American market to aid in protein stabilization during fermentation. Scottlabs Fermobent PORE-TEC is a sodium-calcium based bentonite with low iron content, specially formulated for addition to juice. Manufacturer’s recommended addition rates for this product are much higher than that used by most Virginia wineries. A standard addition rate of bentonite is between 25-40 g/hL while the suggested rate for Fermobent is 50-300 h/hL depending on the protein load of the juice. Maggie McBride from Scottlabs (personal communication) indicated that these high rates of bentonite do not affect fermentation rate and result in much more stable wines. This experiment compares Sauvignon Blanc wines made from two treatments:

Fruit was harvested and whole cluster pressed on the Europress Champagne press cycle, with the press fraction extracted at step 21. Liquid SO2 (5.5% solution, 45 ppm) was added to the press tray. Juice was cold settled at 45°F with addition of 1.6 ml/hL Cinn Free for two days, then racked to a variable capacity tank to ensure that the turbidity was the same for both treatments. Juice was stirred while barreling down to four identical 200L stainless steel barrels filled to 180L per barrel with mixing. Turbidity measured 223 NTU for all four barrels.

Prior to filling, Pluxbenton N was rehydrated in 20x its weight in water (according to manufacturer’s instructions, 2800ml water for 144g of Pluxbenton) for 8 hours, then 40 g/hL Pluxbenton N was added to the control barrels (1440ml per barrel). Fermobent was rehydrated in 5x weight in water (1800 mL water for 360 g Fermobent) for 5 hours, then 100 g/hL Fermobent was added to the treatement barrels (900 mL per barrel)

All barrels were inoculated with 20g/hL Vin 2000 yeast rehydrated in 6 g/hL Fermoplus Energy Glu (AEB). Barrels were stirred once the day after inoculation to resuspend any settled bentonite. Fermentations were monitored daily for Brix depletion and temperature. Barrels were moved to colder or warmer temperature environment as needed. Nutrients were added due to low YAN at 1/3 Brix depletion in two additions for a total add of 40 g/hL Actimax Natura and 10 g/hL DAP which is an addition of 80mg N/L.

Completion of fermentation was confirmed with enzymatic analysis. After the completion of fermentation, 40 ppm SO2 was added. Wine was cold settled to remove lees, then racked to stainless steel barrels for aging. Total volume before and after racking was determined to calculate percent loss. In-house protein stability analysis was completed to determine the amount of bentonite needed to achieve stability for both treatments. This measure was confirmed by ETS labs. Each wine was treated accordingly at this level prior to the sensory session.

Sensory analysis of stabilized wine was completed by a panel of ­­­27 wine producers. Wines were presented blind in randomly numbered glasses. Tasters were presented with three wines, two of one type and one of another, and asked to identify which wine was different (a triangle test). There were three tasting groups with the unique wine in the triangle test balanced between groups. Tasters were then asked to score each wine on a scale of 0 to 10 for thiol intensity, fruit intensity and palate volume. They were also given open ended questions to describe the wines. Results for the triangle test were analyzed using a one-tailed Z test. Descriptive scores were analyzed using repeated measures ANOVA.

Juice chemistry was typical from Virginia Sauvignon Blanc (Table 1). Fermentation proceeded smoothly to completion; fermenting on high levels of bentonite did not slow the fermentation (Figure 1). There were few differences in wine chemistry at the completion of fermentation. The treatment wine had slightly higher residual sugar than the SOP wine, but sugar levels of both wines are below the average level of sensory detection for sweetness (5 g/L) (Table 2). All measures of color were below the detection of the test; there was no measurable difference in color (a mark of oxidation) with high levels of bentonite. Upon racking, the Pluxbenton treatment (SOP) had a 2.5L loss per barrel (1.4%) while the Fermobent treatment had a 4.1L (2.3% loss per barrel).

Neither wine was highly unstable. Both wines finished fermentation with very little chitinase. The Pluxbenton lot needed only 1 pound/1000 gallons (0.12 g/L) bentonite to achieve stability while the wine fermented on 100 g/hL Fermobent was stable after fermentation (Table 3). Protein stability is known to be subject to vintage variation. In 2018, this same Sauvignon Blanc fermented on 40 g/hL Pluxbenton needed an additional 4.2 lbs/1000 gallons (50 g/hL) bentonite to achieve stability.

In a triangle test of wines treated to full stability, 13 out of 27 respondents were able to distinguish which wine was different, indicating the wines were nearly significantly different (Z=1.42, p= 0.07). However, there were no significant differences in scores for thiol intensity (F=0.165, p=0.688), fruit intensity (F=1.037, p=0.319), or palate volume (F=0.847, p=0.367). Several tasters noted in open ended questions that the sensory properties of these wines were very similar. 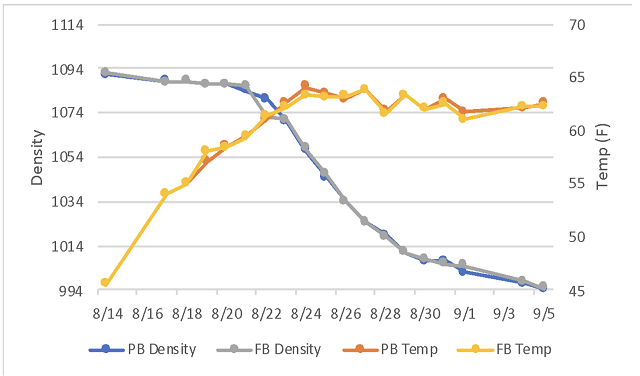 Pathogensis-related proteins: What are these proteins and why are they clouding up my wine!