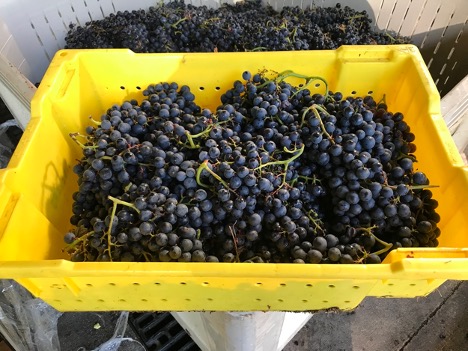 In wet vintages, challenges in the vineyard often translate to challenges in the winery with red grapes picked when they are less ripe than desired. A winemaking philosophy focusing on  maximizing fruitiness and minimizing astringency is advisable when working with underripe grapes. There is no magic bullet to make underripe grapes taste ripe. However, there are a few things to think about when planning your winemaking to respond to these vintages.

Chemically, there are several issues that may come up with underripe red fruit (Mosson et al 2016):

An additional issue of concern is the balance of structure and texture in wine. Zoecklein (#94) argues there is an inverse relationship between sweetness/body and acid/phenols such that an increase in one component leads to a perceived decrease in the other.  This means as astringency increases, perception of sweetness decreases. Sweetness and body are affected by alcohol, polysaccharides, and fruit intensity while acid and phenols include tannin intensity, astringency, and bitterness. Methoxypyrazines increase the perception of tannin intensity.

Underripe grapes can lead to unbalanced wines in several ways:

Highly extracted wines made from underripe grapes will be unbalanced. This leads to winemaking decisions that limit extraction of astringent compounds and boost elements of sweetness (short vatting) (Zoecklein #78).

Sweetness can be increased by the addition of polysaccharides and by increasing alcohol (through chaptalization). Several enological companies sell yeast derivatives that can be added to the fermentation to improve colloidal balance/polysaccharide availability (Chauffour 2017, Scottlabs). Polysaccharides can also be boosted in the form of additions post-fermentation.

Chaptalization alone has been shown to decrease the perception of underripe flavors. Casassa and Harbertson (2016) studied the effect of ethanol concentration on seed tannin extraction in Washington State Merlot. They found that the degree of seed tannin extraction was the same with different ethanol concentrations (from 11.7% to 14.4% ABV), and that chaptalization reduced the sensory perception of vegetal character found in wines made from underripe fruit.  They postulate this effect is due to increase in solubility and volatility of aroma compounds with increasing alcohol. In a separate study (Sherman et al 2018), chaptalization of wines harvested at 20 brix were originally described in sensory analysis as sour and green.  Chaptalized replicates of this juice were fermented and the resulting wines were described as fruity and sweet. The authors conclude that “wine ethanol concentration is more important for the sensory profiles of wines than is fruit maturity at harvest.”

After alcoholic and malolactic fermentation are complete, there are additional interventions that can be considered in the cellar. These include micro-oxygenation (Zoecklein #114, Mozzon et al 2016), several additives and wood exposure. These considerations will be explored in subsequent newsletters.

#81 Maximizing Aroma/Flavor and Structure in the 2003 Red Wines