Petit Manseng is a grape variety that shows great promise in Virginia vineyards, but has challenges in the winery, where it is difficult to balance acidity, alcohol and strong tropical flavors to achieve a harmonious wine. In this experiment, Petit Manseng was harvested at three target Brix: 23, 24.5, and 25.5 and made into wine using identical winemaking techniques. Resulting wines showed predictable increases in alcohol and decreases in acidity measures with grape maturity. Wines from the second and third harvest had values for sugar:acid balance that fell within published values for quality white wine. In blind sensory analysis, wine from the first harvest was ranked as having the least varietal character while wine from the third harvest was ranked as having the most varietal character, however there was no clear preference among participants for wines from early vs. late harvested grapes.

Petit Manseng is a grape variety that shows great promise in Virginia vineyards, but has challenges in the winery, where it is difficult to balance acidity, alcohol and strong tropical flavors to achieve a harmonious wine. Several winemaking strategies have been explored to find a balance of acid and alcohol in Petit Manseng when fermented dry. Some winemakers have experimented with earlier harvest dates to reduce alcohol level and tame some of the aggressive aromatics Petit Manseng can present, however this must be balanced with acidity that may be very high with an early harvest. Skin contact prior to fermentation releases potassium that can precipitate tartaric acid and lead to lower acid wines, however this must be balanced with the introduction of phenolics that can be texturally apparent and can lead to early browning. Some have attempted malolactic fermentation, however high alcohol and high acidity are a challenging environment for O. oeni and can lead to high levels of volatile acidity. Aging the wine on yeast lees for an extended period of time (18 months) can lead to release of polysaccharides from yeast hulls that add roundness to the wine but can come with the added risk of VA accumulation and browning during long aging.

The purpose of this investigation was to explore the balance of alcohol and acid that occurs when Petit Manseng is picked at different levels of ripeness. The hope is that there may be a sweet spot for balancing these elements in a dry wine. Additionally, changes in the flavor profile of Petit Manseng were assessed to determine the progression of characteristics from mineral to tropical with different levels of maturity in this variety. In this experiment, Petit Manseng was harvested at three target Brix: 23, 24.5, and 25.5.

Grapes were harvested on August 20, 28 and 31 based on vineyard sampling and target Brix levels. With the exception of harvest dates, all other cellar operations remained the same among lots.

Grapes were whole cluster pressed with minimal foot stomping in the press into a single tank. After pressing, the tank was set to 45°F (7°C) for cold settling. After 36 hours, clean juice (NTU between 200-400) was racked to into neutral barrels of similar cooperage, age, and dimension for fermentation with SO2 addition to a target of 1.80 molSO2 (25ppm, 30, and 38 ppm, respectively). Juice was inoculated with a well-mixed ambient fermentation starter. Fermentations were monitored daily for Brix and temperature. Fermentation was carried out in a 65-70°F room with fermentation temperature anticipated to reach 75-80°F. At 16°Bx, the fermentations were inoculated with 0.15 g/L DV10 yeast rehydrated in 0.2 g/L GoFerm. Nutrient additions of Superfood and DAP were done based on Brix level, at 1/2 and 1/3 Brix depletion. Barrels were warmed at 6°Brix and topped when fermentation reached 0°Brix.

The goal for this wine was to ferment to dryness. Though initial fermentation was on pace, the fermentations struggled when they reached Brix levels less than 0. In Petit Manseng, it is common for fermentations to be 1.5 – 2.0 Brix negative before residual sugar is fully utilized. For this reason, fermentations were re-started. Oenocell (0.3 g/L) was added an allowed to settle for 2-3 days. After racking off Oenocell, a pied de cuvé was prepared of water, wine, sugar to 5°Brix, and Fermaid O. Uvaferm 43 Restart yeast (0.4 g/L) was rehydrated in GoFerm (0.5 g/L) according to manufacturer’s instructions for restart rehydration. The pied de cuvé was added after 20 minutes and allowed to acclimate prior to addition to the larger lot of wine. When residual sugar was confirmed to be fully utilized, 30 ppm SO2 was added.

Sensory analysis was completed by a panel of ­­­25 wine producers. Wines were presented blind in randomly numbered glasses. There were three tasting groups with each group encountering the wines in a different order. Tasters were asked to rank the wines based on overall aromatic intensity, Petit Manseng varietal character, acidity, and overall balance. A group discussion prior to tasting identified characteristics that contribute to Petit Manseng varietal character. Participants were also asked to indicate which of the three wines they preferred and given open ended questions to describe the wines. Results for the ranking tests were analyzed using Friedman’s test with multiple pairwise comparisons using Nemenyi’s procedure. Differences in preference were determined with a Chi square.

There was close agreement between vineyard sampling data used to determine harvest dates and Brix at harvest (Table 1), leading to a broad range of alcohol levels (Table 3). As expected, increased hang time led to increased Brix accumulation accompanied by increase in pH (Table 1). The pH increased by 0.1 in 8 days between picks 1 and 2 with an increase in 2°Bx, and another 0.1 in three days between picks two and three with an increase in 1°Bx. Titratable acidity fell approximately 0.3 g/L per day for each interval (Table 1)

The wine from pick 2 showed several indicators of malolactic fermentation. Malic acid in the initial juice chemistry was lower (Table 1), fermentation was sluggish compared to the other two fermentations (Figure 1), and final wine chemistry includes lower malic and higher lactic acids (Tabel 3). Partial malolactic fermentation in wine from the second pick may also have affected the overall balance of the wine by lowering TA and increasing pH, as well as changing the perception of acidity. Fermentation kinetics of Pick 1 and Pick 3 (Figure 1, Table 2) indicate the stressful conditions of acidity may impede the completion of fermentation more than the stressful conditions of alcohol. However, Pick 1 finished fermentation with lower volatile acidity than Pick 3 (Table 2).

Several metrics of sugar:acid balance have been defined as measures of maturity for quality wine production, as reviewed by Plessis (1984)1 and Bisson (2001)2. Both authors caution that ranges for quality wine are variable across regions and are not always good indicators of varietal character, however, these measures do provide a value for balance that can be compared across vintages and sites. Wines from both Pick 2 and Pick 3 are within the range of quality white wine for both measures proposed (Table 4).

There were no significant differences in rankings for overall aromatic intensity (Q=2.74, p=0.25), acidity (Q=2.74, p=0.25), or overall balance (Q=4.58, p=0.10), however participants ranked pick 3 as having the most varietal character and pick 1 as having the least (Q=5.99, p=0.02; Figure 2). This finding is consistent with the definition of Petit Manseng varietal character as having high levels of tropical aromas, as these aromas are often developed late in grape ripening. There were no significant differences in preference among the wines (X2 = 0.83, p=0.66). Discussion during the sensory session revealed preferences among the experimental wines differed based on whether the participant enjoyed the normal varietal character of Petit Manseng, which was described as highly acidic with assertive tropical characteristics.

Table 2: Summary of end of fermentation for three picks of Petit Manseng 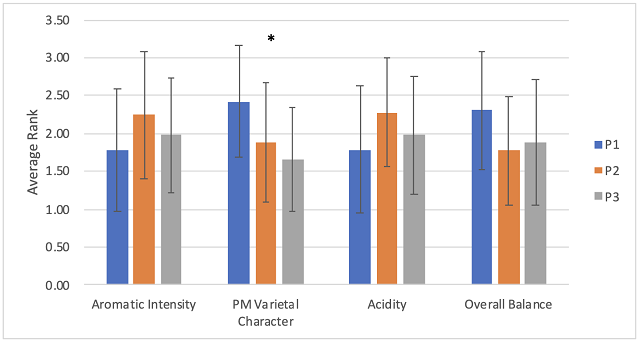 Figure 3: There were no significant differences in overall preference among picks. 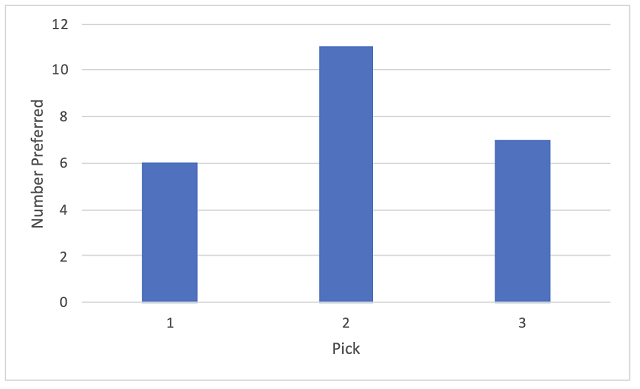