Use of CelStab on Tartrate Stability in Vidal Blanc (Laffort) (2017)

Both treatments increased cold stability, but traditional cold stabilization had a greater impact in this case.  Other wine chemistry was not affected by the treatments.  For the triangle test, of 10 people who answered, 4 people chose the correct wine (40%), suggesting that the wines were not significantly different.  Of those who correctly distinguished the wines, half preferred the cold stabilized wine, and the other half had no preference.  Due to the very low number of judges answering for preference, this result is very weak.  For the descriptive analysis on April 4, there were no strong trends for the descriptors used in this study.  In the future, CelStab should be compared to other enological products, performed on other grape varieties, and more sensory work should be performed. 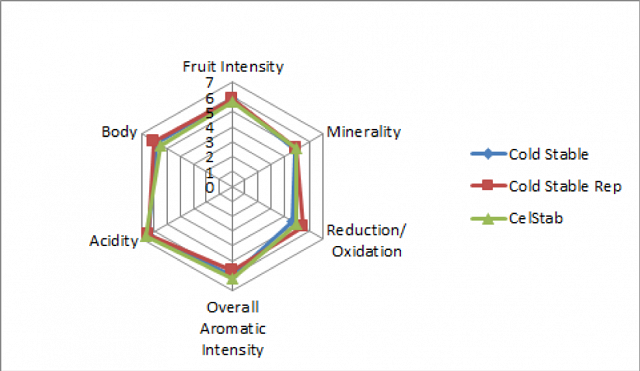 Identically sourced Vidal Blanc grapes were whole cluster pressed up to 1.1 bar into one tank on the same day and fermented normally.  40ppm sulfur dioxide was added at press.  Tank was settled with Pec5L at 38°F for 3 days, and was then racked and inoculated with Alchemy I.  Juice was fermented at 59 degrees, and after completion of fermentation 50ppm sulfur dioxide was added. Heat and cold stability samples were taken at this point, around November.  The wine was then bentonite fined and sterile filtered and divided into two lots:

All other treatments between wines were identical.

These wines was tasted on April 4.  For the triangle test, descriptive analysis,  and preference, anybody who did not answer the form were removed from consideration for both triangle, degree of difference, and preference.  Additionally, anybody who answered the triangle test incorrectly were removed from consideration for degree of difference and preference.  Additionally, any data points for preference which did not make sense (such as a person ranking a wine and its replicate at most and least preferred, when they correctly guessed the odd wine) were removed.

In order to balance the data set to perform statistical analysis for descriptive analysis on the April 4 tasting, any judge who had not fully completed the descriptive analysis ratings were removed.  In order to then make the number of judges between groups equivalent, one judge from group 2 was transferred to group 3, and another judge from group 1 was eliminated.  This resulted in a final data set of 3 groups, each with 2 judges (considered as replications within groups, and groups were considered as assessors).  Data was analyzed using Panel Check V1.4.2.  Because this is not a truly statistical set-up, any results which are found to be statistically significant (p<0.05) will be denoted as a “strong trend” or a “strong tendency,” as opposed to general trends or tendencies.  The statistical significance here will ignore any other significant effects or interactions which may confound the results (such as a statistically significant interaction of Judge x Wine confounding a significant result from Wine alone).  The descriptors used in this study were Fruit Intensity, Minerality, Reduction/Oxidation, Overall Aromatic Intensity, Acidity, and Body.