Sulfur dioxide is a traditional, inexpensive additive used widely at many different stages of modern wine making to combat oxidation and microbial spoilage. Despite all that is known about the chemistry and interactions of SO2 in wine, many practical questions remain for winemakers. Building on the findings of an experiment conducted in 2018, the work reported here seeks to explore the effect of a high (75ppm) vs. very high (100 ppm) dose of SO2 at the end of malolactic fermentation. Addition of 100 mg/L SO2 allowed wine to age above a target of 0.5 mg/L without additional dosing during aging while 75 mg/L did not. Wines treated with the very high rate were given significantly higher scores for aromatic intensity and nearly significantly higher scores for fruit intensity and overall wine quality.

Sulfur dioxide is a traditional, inexpensive additive used widely at many different stages of modern wine making to combat oxidation and microbial spoilage. It can be used pre-fermentation to control microbial populations that come in on grapes and oxidation of juice, post-fermentation to protect wine from oxidation and spoilage during aging, for storage of barrels to prevent microbial spoilage, and even as a general cleaning agent in the winery. Despite its widespread use, many questions of everyday practical use remain.

SO2 is most often used in the winery in a liquid form. When SO2 dissolves in water, it doesn’t remain only as SO2. Instead, it interacts with the water in a way that takes three forms: molecular sulfur, bisulfite and sulfite (Figure 1). How much of any one form is present depends on the pH of the solution. Molecular sulfur is the only form with antimicrobial properties, while the bisulfite form conveys anti-enzymatic and anti-oxidant properties1–3.  Unfortunately, bisulfite acts by binding to target molecules (such as the enzymes that cause browning), and when bound, they are no longer active in the wine. When determining how much SO2 to add, it is important to keep in mind that some of the added SO2 will be bound up by components of the wine. Estimates of SO2 binding are that 30-50% of the SO2 addition to finished wine will be bound up within the first few days of addition in an aging wine, while up to 70% of the initial dose of SO2 after completion of fermentation will be bound1,2,4. 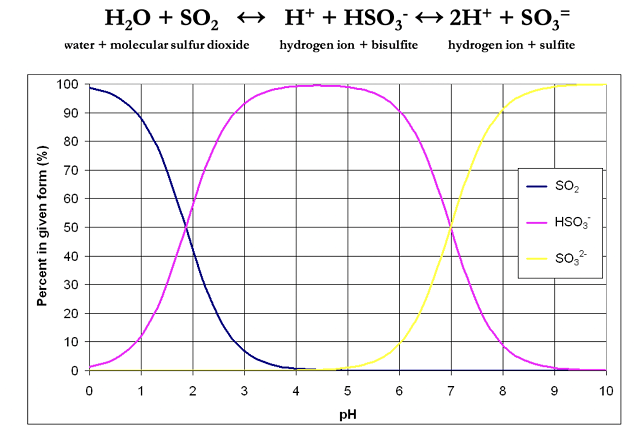 The decision of how much SO2 to add to a wine is a good demonstration of the goldilocks principle: one wants to add just enough but not too much. SO2 had many positive effects on sensory perception of wine. Judicious use can:

However, SO2 also has negative sensory effects including:

Despite all that is known about the chemistry and interactions of SO2 in wine, many practical questions remain for winemakers. In a WRE experiment in 2018, Kirsty Harmon from Blenheim vineyards divided her Cabernet Franc into six treatment regimes with varying barrel age (new and neutral), dose (30mg/L vs. 70 mg/L) and timing of SO2 addition (immediately after the end of malolactic fermentation vs. 14 days later). The free and total SO2, SO2 addition rates, volatile acidity and microbiological evolution were reported. The experiment found that the high initial dose led to higher total sulfur in each case. However, wines treated with the high initial dose were also closer to the target SO2 rate for aging for a higher proportion of the aging period. High initial dose may have helped preserve anthocyanins and had lower overall accumulation of acetic acid during aging. New barrels had lower free SO2, accumulated higher amounts of acetic acid, and had high microbial populations of Pediococcus and acetic acid bacteria than their neutral counterparts on the same SO2schedule. If using new barrels, care should be taken to monitor SO2 levels early in aging to accommodate for additional SO2 binding by new barrels vs. older barrels.

The 2018 experiment also found that delaying SO2 addition by two weeks decreased the total sulfur levels at both dose levels. Wines with delayed SO2 addition began aging with higher acetic acid but experienced very little acetic acid accumulation during aging. The high, delayed dose was closest to the target SO2 during aging.  Though these wines were distinguishable from one another during sensory analysis, there was no significant preference for one wine over the other and no consistent trends in the differences (color, astringency, fruit or aromatic intensity).

There were two lots of Cabernet Sauvignon used in this experiment. For each, wine was vinified as a single lot until the completion of malolactic fermentation, after which individual barrels from the lot received different doses of SO2.

Cabernet Sauvignon was made according to the winery’s standard protocol. Grapes were hand harvested, chilled overnight, sorted, destemmed and loaded into TBins with the addition of 50 mg/L SO2 (as a KMBS addition). Tbins were inoculated at a rate of 20g/hL of EC1118 yeast the day after processing. After two days of fermentation, 1 g/L tartaric acid was added to each bin. There were no additions of nutrients or sugar. Fermentations were monitored for Brix and temperature each day. Bins were punched down twice daily throughout the fermentation until Brix were lower than -1.5. Once negative Brix had been reached, fermentations were pressed with free run and press fractions combined. Wine was inoculated with Scott Labs MBR process (0.01 g/L), allowed to settle for 3-4 days, then transferred to barrel for malolactic fermentation in comparable barrels..

Malic acid depletion was monitored every 4 days. SO2 was added two weeks after malic acid tested less than 0.03 g/L by enzymatic analysis. (The 2018 study showed a delay of two weeks decreased overall total SO2 and improved sensory characteristics of the finished wine10.)

Cabernet Sauvignon from the Claim Vineyard were separated into two pairs of barrels: one pair of neutral barrels and one pair of second-use (2018) barrels, for a total of three pairs of SO2 dosing comparisons. Barrels were monitored for free and total SO2 once per month. If needed, SO2 additions were made to maintain a target of 0.5 mg/L molecular SO2.

Modified sensory analysis was completed on the wines from the Claim Vineyard aged in neutral barrels. Due to social distancing restrictions at the time of COVID-19, wines were shipped to 27 panelists (all wine producers) in randomly numbered sample bottles. Tasters were presented with three wines, two of one type and one of another, and asked to identify which wine was different (a triangle test). There were three tasting groups with the unique wine in the triangle test balanced between groups. Tasters were then asked to score each wine on a scale of 0 to 10 for color intensity, aromatic intensity, fruit intensity, astringency, and overall wine quality. They were also given open ended questions to describe the wines. Results for the triangle test were analyzed using a one-tailed Z test. Descriptive scores were analyzed using repeated measures ANOVA.

One concern with using higher doses of SO2 is bleaching of color. Color is affected by many factors other than just the concentration of pigments, including pH, SO2 and the presence of cofactors. As each pair came from the same press lot, the only difference between treatmetns that would affect color should be the presence of SO2 and the evolution of polymeric anthocyanins during aging. There were slight color differences in each lot (Figure 3), with the higher dose barrel having slightly lower color intensity. However, these differences were small and sensory scores for color intensity were not significantly different (Table 5). In each pair, the higher dose barrel had slightly higher concentration of anthocyanins and slightly lower concentration of tannin, however, again, these differences are very small (Table 4) and there were no sensory differences in astringency scores (Table 5).

These results are consistent with, and expand upon, those found in a study conducted in 2018 on SO2dosing in Cabernet Franc comparing additions of 30 mg/L to 70 mg/L. In the 2018 study, higher initial dose led to higher molecular SO2 in the aging wine, though none of the wines achieved the target for the majority of aging at these levels. In the present study, an initial dose of 100 mg/L allowed the wine to age at this target for a majority of the aging period while 75 mg/L did not.  In both studies, higher initial dose led to lower subsequent doses, often with fewer addition events. Overall volatile acidity accumulation was higher in 2018, with 2 of the 3 pairs of barrels showing lower volatile acidity in the higher dose barrels at the completion of aging. (In the third pair, VA was the same.) In the present study, VA accumulation was very similar between treatments. 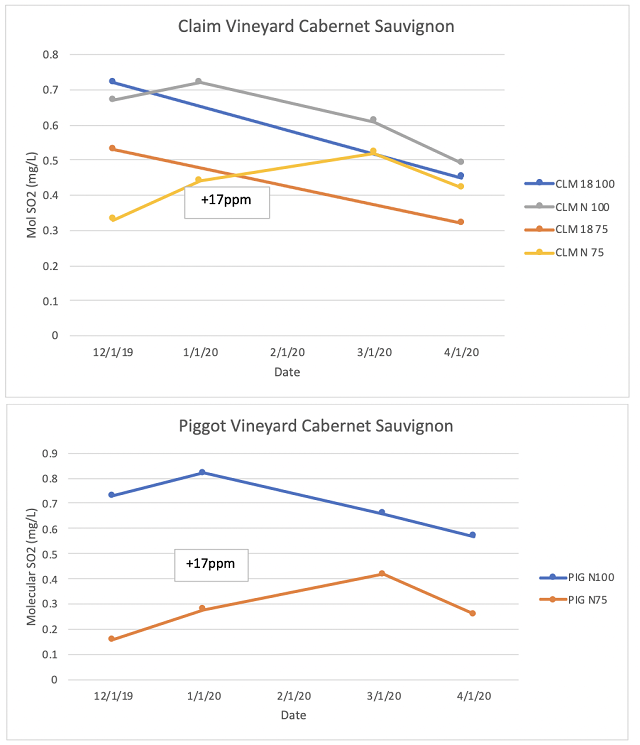 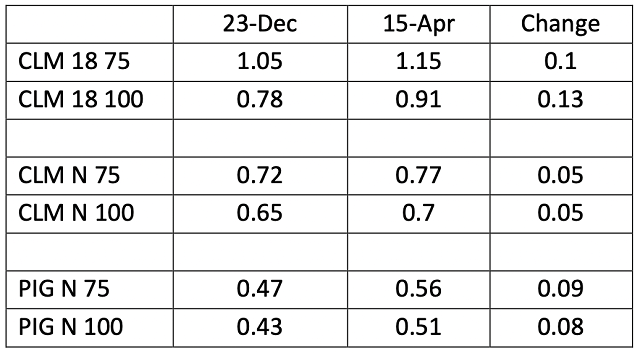 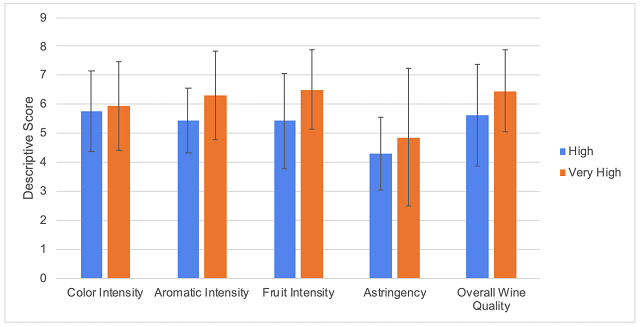 (10) Harmon, K. The Impact of the Timing and Amount of SO2 Addition on Cab Franc Chemistry, Structure and Sensory Characteristics (2018). Winemakers Research Exchange.