When used in the winery, SO2 is most often in a liquid form. When SO2 dissolves in water, it doesn’t remain only as SO2. Instead, it interacts with the water in a way that takes three forms: molecular sulfur dioxide, bisulfite and sulfite (see equation). The amount of any one form that is present depends on the pH of the solution, with the equation shifted to the left in low pH environments and to the right in high pH environments. This means that, the higher the pH, the less molecular sulfur dioxide is available (1–3). These relationships are also in dynamic equilibrium, so if SO2 is removed from solution, say by entering into a microbial cell, sulfite ions will give up another hydrogen ion to replenish the “missing” molecular SO2. Likewise, if a bisulfate anion binds to an acetaldehyde, a molecular SO2 molecule will gain and O and an H to replace it. This happens only as much as the remaining ions are available such that if the balance is 20%, 60%, 20%, they will always be in this balance, regardless of what concentration that means for each constituent. (At wine pH, this is more realistically 2%, 98%, 0.1%). Also, if SO2 is added to the solution, even if it is added in the form of molecular SO2, it will quickly redistribute to its various forms based on pH (1–3). 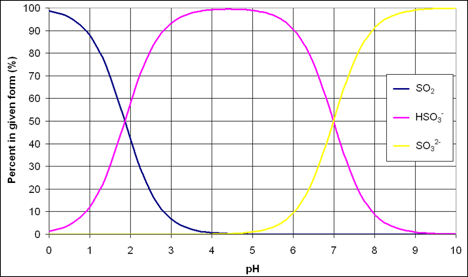